An inventive writer and live arts producer, Charlotte Hathaway is becoming known for delivering imaginative and engaging creative projects exploring the realms of oral tradition. Having studied at the School of Scottish Studies at the University of Edinburgh, her degree focused on culture, identity, folklore, supernatural beliefs, traditional music and traditional stories. In 2013 she was selected to work on a new commission for Remembered/Imagined by Mr McFall’s Chamber and Distil. The project brought together pairs of composers and writers to explore the Archives at the School of Scottish Studies and create a fusion of music and words for live performance, “The results refracted folk material into unexpected shapes without ever destroying its essence” – The Scotsman ****. This exciting way of collaborative working fuelled the desire to extend the concept to create an entire album and live show based on a marriage of dramatic spoken word and music. This became ‘The Dead Stations’:

“…one of the most ambitious projects to emerge in Scotland this year so far” Alan Morrison, The National
“…a satisfyingly unsettling tale, perhaps made more so by the serenely beautiful music” **** TVBomb
“Charlotte Hathaway has conceived a performance that compels on a number of different fronts, each one of them mesmerising” Folk Radio UK

Charlotte is the author of several stage plays for young people and a series of humour books. She was instrumental in developing and producing live productions such as Mike Vass ‘In the Wake of Neil Gunn’, Fiona Hunter and Kathleen MacInnes ‘Crossing Points’ and cross-cultural and cross-arts youth projects. She founded boutique record label Unroofed Records with Mike Vass, and also works as a fiction ghostwriter.

She is now based in the Caribbean, pursuing a new adventure sailing and exploring her family history. 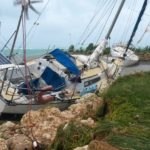 How to Survive a Hurricane

September 2017 brought Hurricane Irma; the first category 5 hurricane to be recorded in the Leeward Islands (before Maria showed up 2 weeks later). It had maximum wind strength of 180mph and waves of around 10m in some places. Across the region there were at least 134 Irma-related deaths. Landfall was in Antigua and Barbuda, […] 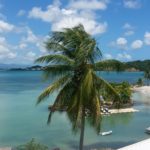 Tropical Depression (aka the things we can’t control)

‘In 1928 I had my first experience of a hurricane,’ my grandmother Joyce had written in her journal chronicling her life in Antigua. After an eventful summer in Europe, I was rejoining my bateau in Guadeloupe during peak hurricane season. Part of the reason I’d chosen Guadeloupe was that it was the next island from […]