A story told through original music and animation; combining live performance, recorded actors and projections. Written by Charlotte Hathaway, music and lyrics by Mike Vass. Mike Vass and Mairi Campbell come together to create a haunting landscape of music and song.

“The whole forest has this feeling of going on forever. And if you lose track of the trainline then you’re lost. But it hugs the mountain and that’s hard to lose. I think there must have been a lot of people living here once because sometimes there are roads that lead nowhere, and of course there’s the dead stations. They’re like these relics eaten by nature. Reclaimed by the forest. Like it’s taking them apart stone by stone. … No, the train never stops at any. They just chug past the window.”

Dead Stations are out of use platforms on a remote train line through the forested mountains.

The piece came about as a result of the 2013 Remembered/Imagined project which commissioned pairs of composers and writers to create a collaboration of words and music inspired by the School of Scottish Studies Sound Archives; and performed by Mr McFall’s Chamber, an actor and a singer.

It was the first time Charlotte and Mike had worked together creatively and they wanted to develop this concept to create a longer, more ambitious and more immersive piece.

It’s a story designed to be listened to: a mystery about loneliness and the mind, inspired by a train ride through Brazil’s Atlantic Rainforest and abstract ideas about Little Red Riding Hood.

Click here to take a look at all artwork and photos 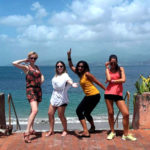 I was squeezed into the car we’d christened ‘Electric Furious’ (because it made noises like a dying electric car and didn’t have the power to get us up hills) with my three Spanish housemates (‘mes Espagnols’) and an American; windows down because there was no air-con and the same five reggaeton tunes on a loop […] 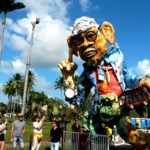