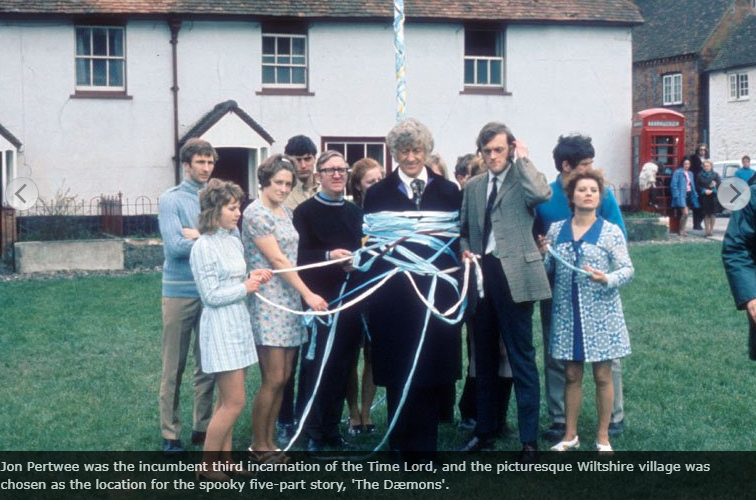 My mother grew up in a village called Devil’s End.

OK, in reality it was Aldbourne, a quintessential chocolate box in Wiltshire, but they filmed a series of Doctor Who outside her house in the 70s and for a while this was the main thing I associated with my grandmother Joyce. I never met her, as she died shortly before my parents got married, but it turned out we had a lot in common. For a long time in my imagination, however, the only thing I really knew about her was seeing a few second’s clip of her as a villager looking out of a window in the TV show. Things were happening (maypoles, English village pagan stuff, scifi dramatics). Then there was her face, filling the whole screen. ‘She looks a bit like you, Mum,’ is what I pretend I said in that moment. Then the church blew up and there were BBC demons all over the place, and I have some sort of image in my head of Mum as a girl riding round in Jon Pertwee’s famous car Bessie, the series props crowding out her garage.

That was basically all I really knew about my grandmother for quite a while. Over the years I found out that we both shared a love of growing things and making jam out of them, and brewing home-made yoghurt. More recently I learned that, like me, she also played the violin (I’d spent my teens desperate to play music, but I wasn’t sure what until I discovered one day that what I really wanted was to play the fiddle). It also took me a while to realise that she’d grown up in the Caribbean, in the former British colony Antigua. In fact her Nugent family had been settlers there in the 1700s (I have my mum’s cousin Nick’s website to thank for a lot of what I now know about that side of things).

Anyway, I was very aware that my grandfather had come from Glasgow (ish – Paisley actually but I didn’t know what Paisley was when I was younger), and had even been to the same Edinburgh school I’d worked at as a life model (naked! for kids!) when I’d inevitably gravitated towards Scotland when I left home (to play the fiddle, and eventually start a career in traditional music management/organisation). It was whilst living in Glasgow that I finally realised I needed to pick myself up and get out of there for a time. I wasn’t sure why, but I desperately needed to go to the Caribbean. My grandfather had left Glasgow in the early 1930s himself, heading for Antigua for adventure and work as a sugar engineer, and to sail boats. This is also something that I never had much of an idea of when I was growing up, but as my own plans to do the same surfaced, so did the revelation that I was, in fact, following exactly in the footsteps of two grandparents I’d never known.

My mother grew up in a village called Devil’s End, which for me has come to represent this exciting and dark tangle of family roots which, the more I dig into, the more fascinating things I discover. I knew I was instinctively drawn to the Caribbean (aside from the lure of sunshine and turquoise seas?), but even though researching family history can be quite cool, as a white person whose ancestry is colonial, there are also uncomfortable truths to come to terms with.

Colonialism isn’t the be-all and end-all of contemporary life in the Caribbean, but it is its biggest influencer and you can’t talk about one without discussing the other. My experience in the Caribbean was of sailing, sunshine, beaches, rum, culture, the environment (and how it wants to kill you), romance, and very cool people from a multitude of backgrounds. But it was always underwritten by what had happened there before, and what my role as a foreign white woman was there now. I don’t really want to make this story about race, because I still feel thoroughly underqualified to even scratch the surface of the topic. But you can’t not mention it; it’s deeply important. I’ll leave that thought there for now, and hopefully return to it later. Me, Grandpa and my brother on Grandpa’s last boat, Rosenda II, circa 1993

The next important thing to mention at this juncture is that quite early on in my new Caribbean life, I bought a boat. I’d always wanted to, I hadn’t intended to, it wasn’t even a wish or a dream; one day I just knew that this was going to be my next step. Like when you know you’re about to say something stupid but can’t do anything to stop yourself. Or like when you feel queasy for ages and then suddenly BOOM, you have The Knowledge that in exactly three seconds you’re going to puke. And then you do.

I’d known for a very long time that I wanted a boat. Probably since my first (and only, until a few years ago) sailing trip with my Dad, my brother and my other Grandpa when I was about seven. We went to the Isle of Wight for the weekend and I mostly remember being very seasick (a problem that’s still not really gone away), and the smells. The acrid diesel smells that mingled with the salt and the seaweed were all-pervasive and made me feel even iller. Anyway despite this, I was in love with the sea from that moment and couldn’t see groups of masts without having a strong sense of longing. Especially if I saw people’s laundry hanging out to dry. People actually lived on boats! The homely glamour of it all.

But that was my only time sailing until my late twenties. Even though my dad had grown up sailing, and both my grandfathers were sailors, and I was in love with the sea, I never thought it could be something that was my thing (it’s for rich people, obvs). In my early twenties I got a bit obsessed again and tried to persuade my husband-to-be that we could go sailing round the world. But he freaked out about how expensive boats must be, and how neither of us knew anything about sailing, and how this was the most ridiculous thing ever. (All the blogs and vlogs where dreamy penniless inexperienced couples sail round the world were not a thing at this time). So he compromised and we went backpacking for a year which was incredible, but not the same.

When he and I split up, and I fell in love with someone new, it seemed like fate when this guy revealed to me that he was hoping to sail round the world. He didn’t have the chance to offer: I said I was coming too. This was the dream. My dream come true. And how lucky I was to have found someone who not only had this dream, but was capable of achieving it. For lo and behold, he was a sailor who had grown up in the ways of the sea (I still believed I could never be a proper sailor in my own right because I hadn’t started at a young age). We started looking at boats, making plans – it was going to happen! But various circumstances meant that this didn’t work out, and aside from the heartache that comes with a breakup, I was also devastated because I thought my sailing dream was also dead.

I didn’t give up on the Caribbean, though, and found myself a teaching contract on the French island of Martinique. A few months into my contract I was walking in the marina near where I lived and had one of these aforementioned moments of knowledge. ‘I will take a new contract and stay a second year, and I will live on a boat’. It was a magical revelation because of course I wasn’t ready for this sort of thing. And boats are expensive, right? Actually in the Caribbean, not so much. And I had recently inherited some money from my paternal grandfather which could cover something budget, and felt like this would be an expense he’d approve of. Shortly after starting to mull this over, a good friend died very suddenly and very young, and it’s at times like this you remember that putting things off that you could do now is a waste.

I’d never really thought of myself as someone who would be able to speak another language convincingly or drive a car well, but here I was in the French Caribbean, obliged to do both. Surely I didn’t need to find a man with sailing skills to make my dream come true. I could do it on my own. And when you finally get yourself round to thinking like that, remembering how you used to think makes you feel like a really bad feminist. My Grandmother Joyce (centre), checking out how the daemons are destroying her village 2 thoughts on “Introduction to L’Île des Revenants: Island of Returners” 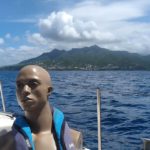